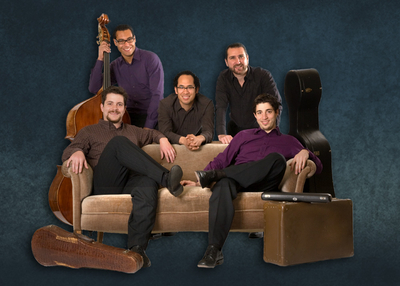 The Bolívar Soloists were formed in London in 2003 and gave their first concert in the Bolívar Hall at the Venezuelan Embassy in London. The ensemble, which specialises in Latin American chamber music, offers a repertoire full of exotic rhythms and original musical forms reflecting the mixture of races and cultures present in Latin America, a repertoire which features the fantastic source of material encountered in Latin American popular music. This material, treated with classical compositional techniques, opens the door to a new musical dimension uniting European and Latin American traditions in the search for music which is both approachable for the audience and allows the artists to express themselves in a familiar language. The prestigious recording label Deutsche Grammophon chose the Bolívar Soloists to accompany the celebrated Mexican tenor Rolando Villazón on ¡México!, his recording of classic Mexican songs. The ensemble subsequently accompanied Rolando Villazón on a European tour with this programme.